Samsung is here again with an amazing smartphone, the Galaxy S10 Lite which is supposed to be a make up link between the Galaxy S10E and the Galaxy A80. While you might wonder the essence of this device, I think it’s Samsung’s attempt to also reinforce the market with a trimmed down version of it’s smartphone.

While the Galaxy S10 Lite isn’t yet released, the likely date is said to be before the end of the first quarters of 2020. But that aside, what makes this smartphone interesting is the fact that it is packed up with tons of features that makes it sits amidst other high-level premium mid-rangers if my definition is okay.

The design of the Galaxy S10 Lite is very basic. Coming with a massive 6.7 Inches display, just like it’s twins brother, the Galaxy Note 10 Lite, the device features an AMOLED display with a hole-punch cut-out at the top of the device’s display. Little bezels as well as tiny chins makes the phone interesting but there is obviously no curved edges. It seems Samsung is doing away with that design as majority of the devices leaked/rumored to be released this year have flat display with no curves.

As for the back, the camera module is rectangular. Powered by the latest ONE UI 2.0 which is built on top of the Android 10 OS, you also get the Qualcomm SM8150 Snapdragon 855 (7 nm) which is a high-end processor unlike the Xiaomi Mi Note 10 which comes with a little mid-level chip.

The RAM is between 6 and 8 GB while the memory is fixed at 128 GB but offers support for an external MicroSD card to increase the storage to about 1TB which is awesome.

One down part which I don’t really think is so bad is the absence of a 3.5mm headphone jack unlike the Galaxy Note 10 Lite. But that’s not a big deal thanks to the Galaxy Buds which are good enough and sounds great.

The battery is a massive 4500 mAh Li-Po battery which should last you for hours. With a price point range to be about $650 USD, it sort of come of a little cheaper than the Galaxy S10E. You can read the full specification n the next tab. 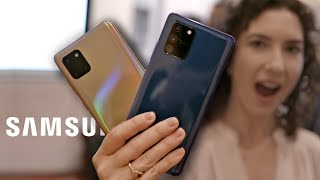