An Amazon courier on the front-line during the Pandemic

by Maria Janetta
in Industry News
Reading Time: 5 mins read
A A
0 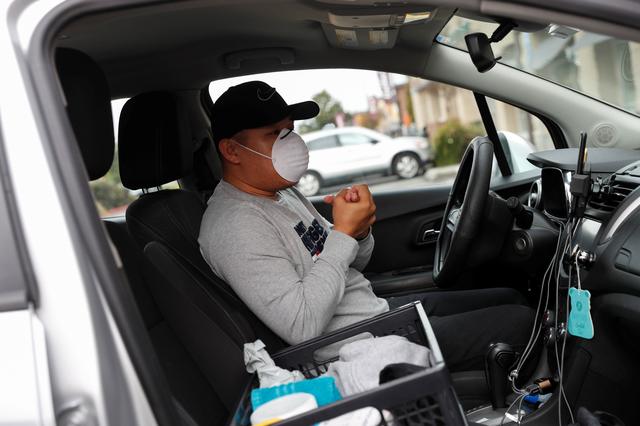 In the midst of the Coronavirus Pandemic, one Amazon courier is always on the go ensuring to make delivery to customers of the company on the daily basis.

This is the story of Excelso Sabulao who delivers groceries for the biggest e-retailing company in the US from California. According to him, his obligation is an effort for hi to continue to provide for his family but now worries that his effort might lead to the downfall of his beloved family consider the level of interaction he has with people on the daily.

“I’m just putting my faith in God that, you know, somehow while doing this, I’m going to be spared,” he said. “Once I get it, I’m going to spread it at home. And you know, it’s like bringing (a) death sentence to my parents.”

Sabulao who is 35 is among the numerous Amazon contractors who make deliveries of food and staples to consumers’ doorsteps despite the US government placing the “Social distancing” order on everyone.

Despite the many risk people like Sabulao had to face being on the front-line, he feel the company isn’t paying and protecting them enough considering their importance in the new state of living in the country.

Sabulao lives in Stockton with his mother who has had mid stroke some three years back while his Father is on a virus-related leave from Walmart. Meanwhile Sabulao took it upon himself to take good care of his parents despite getting them exposed to the Coronavirus but family first based on his culture.

Each day, Sabulao puts on his face mask and tows shopping carts overflown with brown paper bags with stamps of Amazon’s loyalty club Prime. He would load up his car for the Amazon Flex, which is a program that allows contractors sign up for delivery times with their own vehicle.

When the car trunk is filled up, he’ll proceed to stuck up the bags in the back seat of his car. That is usually the toughened part even though another aspect Sabulao fear is having to fetch those orders from the Whole Food staging area where other drivers stood beside one another disregarding health official’s 6 feet apart instruction to further boost the social distancing regulation. Sabulao has to open the same storage coolers that they did, and he generally has no time to use a wipe, he said.

“It’s making me paranoid,” said Sabulao. “You’re handling stuff that other people already put their hands into, and maybe if they have coughed – I don’t know.”

Amazon said gloves, masks and sanitizer are available at the Dublin Whole Foods store and across its facilities. “We remain committed to keeping our teams healthy and safe,” the company said, adding that it was requiring social distancing among staff and telling delivery workers to stay further apart from customers.

The moment he gets into his car, he took off his face mask and drove off to make is delivery. On arriving at his destination, he will have to scan a code on the grocery packages using his smartphone while making the doorstep delivery to clients.

He has wanted to minimize customer contact as much as possible. Amazon’s app lets him text shoppers to inquire where to leave the items and share his estimated time of arrival which means he doesn’t really have to even meet customers physically.

Still, across 21 deliveries Monday, there was no avoiding face time. One woman was in her driveway when Sabulao arrived, so he put the groceries down next to her car. At another home, a customer opened the door, got on her knees and started wiping down the items she had ordered.

According to Sabulao, there have been some generous tips from customers while making deliveries as he recalled during the start of the pandemic, a shopper once tip bumped his $10 pay up to $83 for a delivery which lasted for about 30 minutes as he earned some $289 in over seven hours on Monday which is more than half of which came from tips. Earning $200 is typical for that amount of time, he said.

Increasingly he feels the reward is changing. Now rare surge pay for warehouse deliveries means he may make less than before, and he fears his personal supply of wipes will run out. He wishes Amazon would give him and other contractors sanitizer.

As of today, the US has more than 400 thousand reported cases of the Coronavirus while the number is in millions globally with thousands dead as a result of complications from the virus. Cases such as those of Sabulao isn’t new and even Amazon recently fired one employee who was up against the company’ not shutting down it’s warehouses while putting it’s workers’ lives in danger as more cases have been reported involving the company.

It failed JerryRigEverything's bend test which is a big deal making the Phone 2 Duel a quite fragile smartphone despite its outstanding features.

The flight was canceled for a reschedule in order to ensure the safety of the first man-made helicopter on Mars.