The ambition of XRSpace is to make social VR more engaging 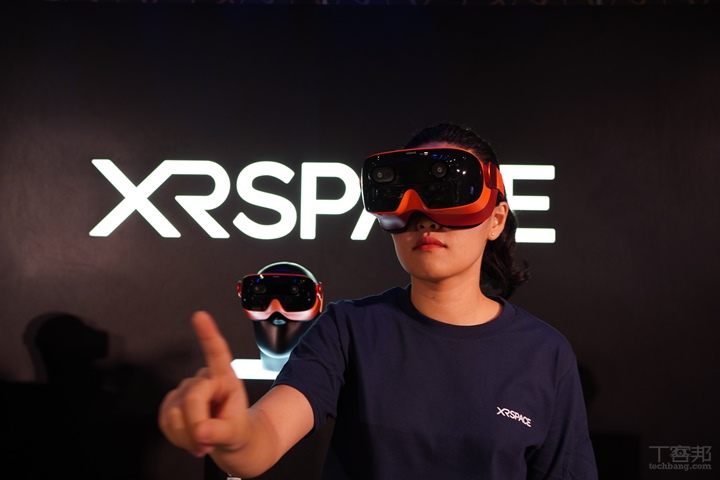 When HTC‘s smartphone business was dying, it tried to revive itself by creating the VR headset business, the HTC Vive but that’s not the story but we’ll be talking more about the former CEO of the company, Peter Chou who had despite parting way from the Taiwanese tech company had been working in the industry including forays into visual effect studio and even a VR game studio.

But with his long career in the tech industry altogether, one thing he never really said to the larger world over the past three years was a project called XRSpace which is basically a start up that wants to revolutionize the current “Gimmicky”, “lonely” and “comlicated” VR experience. With that, the company aims to build a new VR headset that will help regular consumers with intuitiveness and social-first approach.

The name of the startup is XRSpace Mova which according to Chou is apparently the “smallest, lightest” standalone VR or “XR” which is the other name the exec prefers to call it – in the market. It’s also the first of its kind with 5G capacity. While looking at the VR headset, it appears like a pair of ski googles without protruding stereo cameras at the front and when placed side by side, it looks almost like half the size of the HTC Vive Focus.

The weight of the Mova is about 470 grams which is much lesser compared to the likes of Oculus Quest which is 571 grams or the Vive Focus which is 695 gram. This simply tells us that the Mova seems to have improved on compatibility .

Speaking of the specifications of the XRSpace’s Mova, it’s powered by the Qualcomm’s Snapdragon 845 chipset which is also a high-end version over the SD 835 on the Focus and Quest headsets and has 6GB of RAM compared to the 4GB of RAM in most VR headsets and then the battery os much larger, 4,600 mAh unlike the Oculus Quest’s 3,648 mAh.

Aside that, the XRSpace didn’t specify more about the nature of the 2880 x 1440 display panel nor its field of view but what is known about it is that it has a 90Hz refresh rate and a nice 702 DPI pixel density which is really maxed out right above it’s rivals which is probably due to the usage of smaller panel unlike others.

The Mova will ship with a single controller for gaming purposes but it’s designed to be used with hand tracking as the primary control method. This will lower the learning barriers for the average consumer as you would probably just use the headset more because of its less fiddly nature. But the company wants hand gestures to be a core interaction in its virtual world, Manova. And this is where things get different from VR headsets that we’ve seen already.

Toggling most common social social gestures with natural movements can be achieved when one enters the Manova spaces (more on that later) – where you can shake hands with other avatars, give high fives, do fist bumps or even toast with a glass. You can also grab and throw objects which makes shooting hoops or throwing darts with buddies who are miles away in reality more fun. There is also gesture for teleportation by tapping in the air with your index finger to toggle an arrow and then point at your desired spot and then tap again to teleport.

Since the Mova is a 6DoF VR headset, you can walk around physically as you do virtually. The biggest surprise here is that the inside-out cameras here can apparently just about track your legs, so you’re able to play simple soccer games with others in VR as well. It sounds intriguing, but I’ll wait to see how this fares once I’ve tried the headset properly. Due to this, XRSpace allows you to wear a full-body avatar by default instead of making fdo with floating half-body versions like some VR social platforms do.

Avatar features are easily written off as gimmicks, but Chou believes it’s core to making VR work when it comes to social interactions. “Today, one of the reasons why VR is not that exciting, is not getting that level of immersiveness, is that it’s lacking very good digital avatars,” the exec reasoned. “Today, most of the digital avatars are cartoonish and half body, really not something that we can call your ‘digital self.’ So what we really want to do is to let people really actually recognize this is you.”

Also, the avatars have been upgraded with a really high-quality skin textures with AI-based natural facial expression and natural limb movements all which comes from the time when Chou spent working at effects studio, Digital Domain. Chou hopes that users would stick to the same “digital self” when meeting with families and friends or when joining meeting and lessons.

So instead of relying on an existing VR platform like Viveport or Steam, XRSpace has a bigger ambition when it comes to its content and services. The main foundation of that is Manova which is just the company’s own VR social platfom just as we have VRChat or Rec Room, this hub will also be the headset’s main interface.

With private spaces, one can meet up with family members, friends and acquaintances in the virtual home, meeting room, classroom, cinema or even private beach. You can also watch videos, play mini-games or just move on with various virtual objects in whatever scenario you find yourself.

To make things more realistic, the Mova Headset offer a feature which is called “Space scanning” which allow you to scan a physical room and then turn it into a virtual space. There was even a quick video where the user would simply walk around a particular room and then the headset’s front optical sensors would turn the place into a virtual space within the Manova virtual world.

In order to further up it’s ambition, the startup has already secured one of Taiwan’s largest real estate agency, YC House to launch VR house viewing tours in Q3. XRSpace is also working with furniture retailers and travel agencies in order to take advantage of this feature so as to allow customers to preview their purchases or destinations before actually making the jump by using the Mova headset.

XRSpace is also working on bringing VR education and VR collaboration to institutions and companies. In Taiwan, there are already at least four schools on board to integrate Manova for remote learning. Similarly, XRSpace claims that its bank customers are also interested in using Mova as a remote meeting and training solution.

Things in fact becomes more interesting when you head out to public spaces then you’ll start seeing city that acts as a hub from there you can also head to parks, beaches, night clubs and even cinemas in which you can hang out with friends or meet people from around the world. Sincerely this is a really ambitious project and it’s worthwhile.

Another fascinating thing is the MagicLOHAS which is a suite of wellness activities that you can participate with other people in the VR and do things such as Yoga, Tai Chi, Meditation, dancing, stretching and even brain training all of which takes place on top of a mountain by the sea or in the wood. XRSpace tapped a handful of wellness expert in order to add in virtual instructors to each of the activity but users will have to wear body trackers which the company will sell separately in order to make use of this service.

Other public spaces are portals to music, VR videos and VR games. As for the music part, this will be handled by carriers, whereas videos will come from partners like AirPano, Insta360, Digital Domain and other local content partners. In Taiwan’s case, Vogue and GQ are already on board, and XRSpace is also working with a local baseball team to integrate live signal into Manova’s virtual stadium.

In the case of VR Games, the notable ones include Resolution Games’ Angry Bird VR and fishing game Bait! as well as Futuretown’s Mini-golfing game, Cloudlands 2 and shooting game A-10 VR. The number of titles that will be compatible with the XRSpace Mova isn’t yet known especially with it’s hand gesture control system as well as how easy the platform will be to convince game developers and bringing them on board in order to catch up with existing competitors.

XRSpace Mova is definitely an ambitious venture considering the fact that the industry had struggled so long to break into mainstream after looking really promising when it was an emerging tech some few years back. The Mova is said to be about US$599 while the ideas are unique, it will need to work extra hard in order to bring on regular consumers.

XRSpace also hopes that carriers will help out as the company is launching its headset in Taiwan with Chunghwa Telecom whereby it’s working with Deutsche Telekom in the West in Europe in the nearest future. But how soon the project will reach the entire world isn’t yet known but we’ll definitely keep our eyes on ground about any update on the story later on the in the near future.