by Ret SILO
in Headphones

True Wireless Earbuds are here to stay and there is nothing we can do about it. With smartphone companies constantly pulling away from the traditional 3.5mm headphone jack, many of which are doing so because they themselves have introduced their very own TWS earbuds, that might just be a marketing strategy to sell more of their devices.

But as we know, most of these premium-grade earbuds are usually pricey and not everyone is willing to pay top dollars just for a piece of earbuds which is where all these affordable earbuds comes in and yeah they are doing a really great job.

The SWZYOR A2 TWS Earbuds is one of such good heth affordable earbuds you can buy for as low as US$45 as it sounds really superb no jokes about it.

Honor Magic Earbuds launched in Europe for about €99

These are the Best AirPods-Clone we found across the internet

The RealMe Buds Air is finally out, let’s take a look

I got my review unit two days ago and I’m already in love with this thing as it took me right farther off from my current headphones the Pioneer HDJ headphones. The liberty to be able to walk around the house again without hanging to carry my smartphone along each time now makes more sense.

While it of course has its own shortcomings since no gadget is ever perfect. For example, whoever designed the casing of the device did a really terrible job as its too large despite the fact that there is literally alot of empty spaces right within it. Makes me wonder how wasteful they made use of the resources.

Another thing which might quickly come to your notice is the design of the A2 TWS Earbuds themselves as they come in this weird design. I guess SWZYOR is trying as much as possible to avoid copying Apple‘s AirPods Pro this time around despite copying the old AirPods in its previous i12 TWS earbuds which looked and felt just like an AirPods.

But you might wonder what makes this affordable tws earbuds so interesting that it’s recommendable to anyone who is actually seeking to catch a glimpse of a cool audio quality in the Hi-fi regions, the following are one of the things that amazed me about the device.

For a music enthusiast like myself, I always love to listen to songs whenever I’m working. It’s part of what keeps me focused on the job while avoiding boredom as much as possible. But the little issue I have is having to pick my smartphone along everytime I want to do something because might just not be for me and of course I can’t pocket my PCs because I was enjoying the music too much while I needed to get something outside the home office…you get the point I’m making here.

I’ve used a series of true wireless earbuds in the past, some affordable while some expensive but really the SWZYOR A2 TWS Earbuds did fantastic and that’s coming from someone who’s been using the HDJ over-ear headphones for about 2 months now since the time of the pandemic. I just wanted something that feels comfortable and play high fidelity audio into my ears.

The bass of the A2 TWS Earbuds feels great as it’s not overtly done compared to other affordable earbuds such as the HBQ Q32 TWS earbuds.

Being able to hear all the sequences of the instrumentals of a song makes the earbuds really fascinating. It’s as though I was using a mini Pioneer HDJ headphones here. While I’ve not yet tested this kind of immersive audio quality with other type of music, because I’m more of the hip hop guy and I listen to a lot of rap songs and yeah this did really fantastic.

I could remember when I played one of my favorite song (Baby Birkin – Gunna) the instrumentals of that song is very unique and well arranged. If you’re using a bad earbuds, you won’t feel how great the music sound but the SWZYOR A2 TWS Earbuds felt really close to when I first tried the song with the Pioneer HDJ headphones compared to say the Bluedio Hi TWS earbuds.

I also played other favorite songs like Orianthi’s Blues won’t leave me alone which is a rock music and it performed really well. The acoustic guitar felt really great and nothing ear really horrible.

Thanks to the design of the earbuds themselves which looks quite odd as I’ve mentioned earlier. It has this small letter “J” Design which makes the device hangs a little outside the ear with the ear tip protruding right into the ear canal giving you a little bit of a noise isolation because of course there is no electronic Active noise cancelling technology on this and I’m yet to find an affordable earbuds with one though the noise isolation done by the eartips really works well.

As mentioned above the design of the A2 TWS Earbuds feels quite strange and somehow new. Despite not entirely a new product that was launched this year, the design feels like some new experimentation.

One downside to the design comes with the button implementation on the earbuds rather than touch control as we’ve seen in other affordable earbuds lately.

But the earbuds buttons comes really handy as it does a number of things which includes increasing/decreasing the volume of the earbuds, skip/previous songs and answering phone calls.

The casing itself looks annoyingly big. I bet this to be a waste of resources as majority of the inside of the casing is actually empty. It has a small battery compartment, then an LED at the middle of with a button which indicates how much batter is left within the casing with each light representing the amount of battery. There are about 4 Led lights altogether.

Also the casing feels really cheap and fragile. Opening the casing is by sliding the lid off which rotates away and revealing the earbuds compartment right within it. But I actually don’t like the casing. Being a guy who hates carrying purses or bags around, this kind of casing is just not for me as there is nowhere to house it in my pocket. One really annoying thing is that the battery compartment is small and so it doesn’t support reverse wired charging whereby it can serve as a powerbank just like the HBQ Q32 TWS earbuds but that’s another thing though.

The SWZYOR A2 TWS Earbuds comes in three different color variations which includes a matte black design whose casing is well laced out with a red compartment and then a glossy white colored variation with lemon-green inner compartment. And then another glossy lemon-green color variant. The black looks better than the others but we couldn’t get the black instead, the white for this review.

There are some earbuds that uses one earbud as earpiece and the other as a mouthpiece which can be weird if you think about it. But the SWZYOR A2 TWS Earbuds uses both earbuds for making and receiving calls.

Also speaking with it isn’t bad as the people I’m speaking with heard everything I was saying. It although adds this muffled sound to it but it’s probably what you’ll get from an affordable earbuds.

But if your voice is as loud as though of Master Yoda, then you should be able to communicate with this earbuds without having to yell in order for the other person to hear whatever it is you’re saying.

You can also use it for taking voice notes as it cna pick your voice with ease. Sending voice notes via WhatsApp came breezy. Overall, the microphone quality performs slightly above average.

Despite the casing looking and feeling like there is nothing inside of it, its able to charge the earbuds for the required two hours long charge. The earbuds itself lasted for about 4 hours when I used it. While the casing lasted a day upon single charge. But that can vary significantly because you might not be the type of person that would wear an earbuds for hours which means the battery will always get recharged anytime you place it back into the casing and whenever its fully charged, it stopps charging saving the battery of the casing itself.

The performance of the earbuds isn’t bad at all as mentioned earlier. Pairing up the SWZYOR A2 TWS earbuds require yout ake both earbuds out at the same time which makes them auto pair with one another then look for A2 on your smartphone’s bluetooth area and pair. The earbuds can be used individually as they can be paired individually with different devices which might be a cool thing as well. To do that, you just need to take them out separately from the charging casing.

Controlling functionalities such as increasing volumes can be done by double pressing the button on the right earbud while the same goes for the left which in turn decreases the volume of your sound. To Next songs require triple tap on the right button while the same number of tap is required to previous songs but using the left earbud. Other features includes a single tap to pause/play songs (with both earbuds buttons) or picking calls and so forth.

We collect information from many stores for best price available 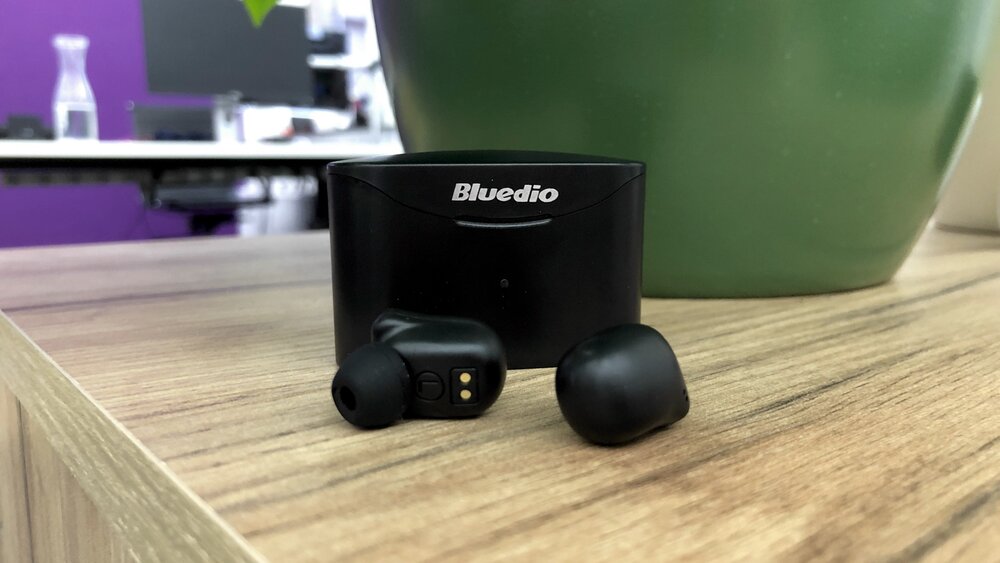 Bluedio makes varieties of audio devices ranging from True Wireless Earbuds to over - ear headphones à d the company seems to be respected in the game for quite a...