But the Galaxy S20 sports a nice 6.2-inch Dynamic AMOLED display and a hole-punch camera at the center top of the device which can be concealed using the software just in case you’re a notch hole-punch hater. But that’s not a big deal from my point of view.

The Camera module is now redesigned which rather than the horizontal designing on the Galaxy S10 Series, its now a single rectangular bump at the top back corner of the device with the 12MP primary sensor along with other two cameras which includes a second 64 MP, f/2.0, (telephoto), PDAF, OIS, 3x hybrid optical zoom and then another 12 MP, f/2.2, 13mm (ultrawide), AF, Super Steady video . The device is capable of recording a 4320p@30fps, 2160p@30/60fps, 1080p@30/60/240fps, HDR10+, dual-video rec., stereo sound rec., gyro-EIS & OIS and has features such as LED flash, auto-HDR, panorama nearing the performance of the Galaxy S20+ models.

As for the front facing camera, it’s a bigger 10MP sensor which can also record a 2160p@30/60fps, 1080p@30fps as well as featuring Dual video call, Auto-HDR. The front facing selfie camera is housed in a hole-punch right at the top-center of the display just the same as the other Galaxy S20+ and S20 Ultra or the older S10 Lite and Note 10 Lite.

Another big bump up of the Galaxy S20 is the hardware specification. It features a 12GB RAM and 128GB of internal storage which is very massive but you can increase that with an external memory card. Powering the entire device up is a Snapdragon SM8250 865 (7 nm+) – for the USA variant while others around the world will use the Exynos 990 (7 nm+). Basically, there is no difference between the Galaxy S20 and the S20 5G just the Network module and RAM bump-up which gives the device more energy to perform more tasks.

Battery is a huge 4000mAh Li-Po battery which is capable of many things though it’s a scaled down battery of the S20+ which is a 4500mAh Li-Po battery. Charging it takes few moments as Samsung bump up the charging port to a 3.2, Type-C 1.0 reversible connector. It’s capable of taking 15W of wireless charging and reverse wireless charging of 9W while the fast charging capability using the USB-wired charging is 25W while its USB Power Delivery is 3.0.

Overall, this is a quite pricey smartphone costing in the realms of $999 being the 5G model meaning the normal base model should cost less than this. 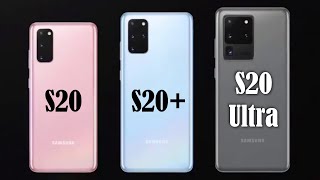