The fastest way to create your own store online

The LaFerrari, McLaren P1, and Porsche 918 Spyder have all come and gone, yet people the world over still put one hypercar on a pedestal above them all. It might not have had the hybrid electric power that the last wave of contenders used, but the Bugatti Veyronsupplanted that with sheer animal brutality. Don’t expect the Chiron to be any different. The Veyron had 1,000 horsepower when Bugatti launched it in 2005. The Chiron will have almost 500 more than that. Five. Hundred.

Time will tell if Bugatti has rewritten the rulebook, like it did with the Veyron, but the Chiron’s numbers are truly frightening. The 8.0-liter, quad-turbo W16 motor still sits behind the two-seat cabin, only now it thumps out – wait for it – 1,478 hp.

It’s the most powerful production street car the world has ever seen.

If that’s unimpressive, the W16 tortures its seven-speed dual-clutch transmission with 1,180 pound-feet of torque, too. That torque peaks at 2,000 rpm, and stays strong until full horsepower is delivered at 6,700 rpm. The turbos themselves are larger, capable of cramming in more air at higher pressures and the entire breathing and cooling system is all new. There’s a new carbon-fiber inlet manifold, six catalytic converters and a titaniumexhaust system that reduces the back pressure.

The Chiron is about 340 pounds heavier than the Veyron, too, with Bugatti claiming 4,400 pounds, and that’s a dry weight, without 26 gallons of gasoline licking the top of the tank. And it has a drift mode. For the demonstrably insane. A freaking drift mode. Bugatti has once again limited the Chiron to a production run of just 500 cars and, before you ask, it’ll take $2.6 million in spare change to secure one. Bugatti says it already has an order bank of 150 cars, or $390 million in fresh cashflow.

The Chiron runs up to a limited top speed of 261 miles per hour. With the Veyron already at the limits of longitudinal acceleration, Bugatti says only that the Chiron will crunch through to 62 mph in less than 2.5 seconds, though the 0-62-mph sprint is less relevant to hypercars than it used to be. Perhaps more frightening is that it will burst from 0-124 mph in less than 6.5 seconds. Or that it rips from 0-186 mph in 13.5 seconds, a full three seconds quicker than the original Veyron.

This new Bugatti still uses the aerodynamic tricks of having separate top-speed and handling modes, reaching out to 261 mph at the peak of its powers and 236 mph with the hydraulically raised rear wing set for maximum driving security. It also still uses the drag to its advantage, by sticking an airbrake up to help it slow down from very high speeds.

While the size is roughly similar to the Veyron (the wheelbase is just one millimeter longer), Bugatti insists the Chiron is an entirely new car. Fair enough. It uses an all-new carbon-fiber chassis tub, with a honeycomb sandwich floor section to help with sound and vibration insulation. It’s a physically huge car. It’s three inches longer than the Veyron. It’s also two inches taller, and an inch and a half wider. That extra width is used to give the two-seat Chiron extra footwell space and another half inch of headroom.

Bugatti says it has 50,000 newton-meters per degree of torsional rigidity, which in simple terms, is up there with the Porsche and Audi LMP1 Le Mans racers, even though the Chiron needs a much bigger space inside for owners and their wallets to sit in. The Chiron retains the Veyron’s all-wheel-drive layout, though this time it uses an electronically controlled multi-plate center differential with torque vectoring to deliver power to whichever end of the car can make the best use of it. The coupe also has torque vectoring on the rear axle, giving it the aforementioned “easy to drift” function that might have to be seen and used to be believed.

The seven-speed dual-clutch is a development of the Veyron’s Ricardo-built unit, with alloy paddle-shifters on the steering wheel for manual use, and there’s now an electro-mechanical steering system. The air suspensionimproves high-speed body control without hurting the ride quality, with everything rolling on custom Michelin285/30ZR20 front and 355/25ZR21 rear tires. While the air suspension is fully adaptive for bump and rebound, it also lets Bugatti give the Chiron variable ride height, depending on the task at hand. Those tasks range from five preset modes, which include Lift (for keeping the nose out of trouble over gutters and speed bumps), Auto, Autobahn, Handling, and Top Speed. While Lift is a low-speed solution, the next three modes are limited to just a paltry 236 mph, while you will still need to stop the car then insert and twist a Speed Key to engage the Top Speed mode for the full time-warp experience. Hitting 261 mph doesn’t just need the car to drop its ride height. It needs aero help, too. The Chiron has a coefficient of drag of 0.38 in its Auto mode, 0.40 in its Handling mode, and just 0.35 in its Top Speed mode, though that screams up to 0.59 when it deploys the Air Brake.

Not that the mechanical system doesn’t promise at least adequacy, with bigger 16.5-inch front and 15.7-inch rear carbon-ceramic rotors, clamped by eight-piston front and six-piston rear calipers. Bugatti insists the stopping power is astonishing, pulling the Chiron back to zero from 62 mph in 103 feet, from 124 mph in 410 feet, and from 186 mph in 902 feet. Don’t ask about 261 mph, though. We did, and Bugatti said not to. 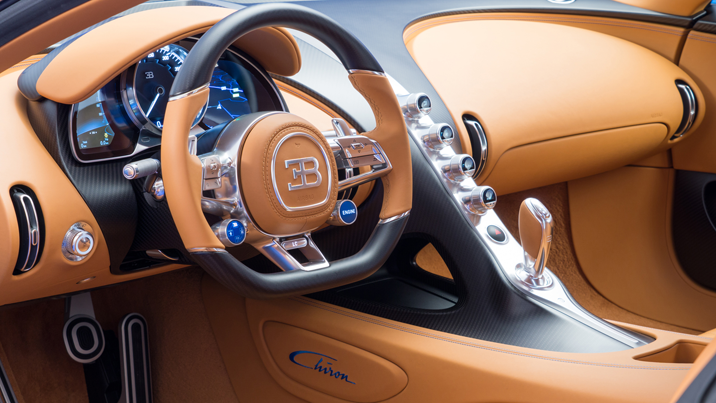 Its interior continues the Veyron’s promise of authentic materials, including leather, carbon fiber, and brushed aluminum, while it has the first airbag in the world that can deploy through the carbon fiber dash to protect the passenger.

The dramatic Chiron styling was lead by design boss Achim Anscheidt. While attention to detail is easy to come by when you’re asked to design an all-new car once a decade, the Chiron has unique issues, most notably the torture of surfacing by the high-speed air. Anscheidt insisted the design team worked unusually closely with the engineering and aerodynamics teams to retain the visual punch without losing any aero efficiency.

Besides the horseshoe grille (topped by a sterling silver and enamel Bugatti badge), there’s a front splitter strong enough to go racing with and thin LED lights that double as intakes to redirect air to the front brakes. There’s a semicircular set of front wings and a large central fin, which runs from the bonnet into the roof and onto the tail, to provide lateral stability at high speed, much like on modern LMP1 racers.

The Veyron’s large air scoops that feed the mid-mounted engine have been replaced by NACA ducts, which keep the bodywork cleaner and deliver less turbulent air. There’s an integrated rear spoiler, a large, central exhaust system, and another hardcore diffuser at the back to finish off the Chiron’s look.

Like the Veyron, the Chiron won’t stay as one stock model for long, with Bugatti planning a successor for each of the Veyron’s main variants, including the Grand Sport, SuperSport, and Grand Vitesse. The Chiron is named after Bugatti’s most famous racing driver, Louis Chiron, who raced for the marque in the 1920s and 1930s and was the official starter of the Monaco Grand Prix into the late 1970s. Chiron won the French Grand Prix in a Bugatti Type 51 and even though he also raced for Alfa Romeo, Mercedes-Benz, and Maserati, he was always closely linked to Bugatti.

Two months ago, we reported that Hertz was giving out its car fleet freely to healthcare workers in New York which was a noble cause for the transportation company whose...